Wuhan lockdown: How people are still getting food

This article was based around the challenge of people getting food in Wuhan China while being restricted to their homes. The main issue was that people were not wanting to come into contact with food delivery drivers as this was one of the common methods to replenish food supplies. The article discussed technological advances where consumers could request the driver to drop off the food and leave or could even discuss special locations to drop food off through the use of an app. One problem that did not cross my mind was how the doctors, nurses, and medical staff at hospitals were going to eat. This article mentions that one delivery company was delivering 1000 free meals daily to the hospitals.

The clear concept of this article was medical geography. The focus was surrounding the city of Wuhan and the pandemic of COVID-19.

For this Blog I chose North and South Korea. My husband is half South Korean so this location naturally sparked my interest. Then of course learning about North Korea is very interesting from a political stand point.

As you can see from the population pyramids, both countries show a low death and a low birth rate. North Korean seemed to fluctuate frequently and I almost mistook it for a developing country Stage 2. However the recent low birth rates show more of a Stage 4. 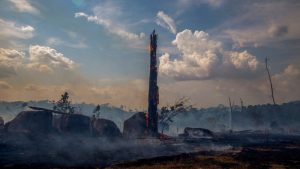 My article is summarized pretty well in the title. Amazon Rainforest Sees Biggest Spike In Deforestation In Over A Decade. Colin Dwyer with NPR wrote this article describing the largest amount of deforestation, in the Amazon Rainforest, since 2008. Brazil has an Environmental Minister, Ricardo Salles, who stated that the cause of the increase was due to illegal mining and logging which they were trying to find ways to stop.

Dwyer went on to say that due to recent changes in presidency, it was believed that budget cuts to environmental agencies has also supported this illegal logging and mining since there is no funding to monitor and stop these crimes. Even worse, when this has been brought to Brazil’s President he responds poorly, implying that he is being personally attacked. It was stated that France's President offered the country 22 million dollars to help fight these fires and it was refused.

Some clear geographic concepts used in this article were:

deforestation, cause of a change in geography

rainforest, describing the physical feature of this location

metropolis, an area making up the geography of a location, in this example used to compare how large of an area is being destroyed

economic growth, relating to the development of other areas of Brazil's economy as a justification for the president to not protect these lands

indigenous leaders, relating to the territory and cultural history being destroyed.

The article I chose was from the suggested list of websites, Time.com. This article discussed the imposing threat of a nuclear arms race around the world. You would think that Chernobyl would have taught Russia a thing or two, but it is evident by this article that they are on a self-fulfilling destructive path. The article began discussing an explosion during nuclear testing at a northern military base. Geopolitics were very evident throughout this article and you could surmise from this secret military testing that economic geography was sure to play a part as resources are shifted and increased. There were also some key topics discussed such as treaties expiring soon between the US and Russia and that it’s likely there won’t be many legal constraints in the future. It was alarming to hear that seven people died in this nuclear explosion that Russia was ultimately trying to hide. As if that wasn't bad enough, in 2010 a Russian submarine sank and the Russian government was willing to let over one hundred of their men die to contain the nuclear secrets on board. This is affecting our physical geography as they allow these killer weapons to contaminate our oceans and our soils.

Hello all! My name is Christina Love. I believe I took a geography class in high school but, I apologize, I don’t remember a whole lot from high school. 13 years ago when I attended, I feel like I did more sleeping than studying. This course is a requirement for my degree. It caught my eye and looked interesting since I do not know much on the subject. The places I plan to identify on the map are my birth place of Garden City Kansas, my current residence of Reynoldsburg Ohio, and Santorini Greece which I would love to visit one day. I say that I "plan" to add these to the map because I am having some technical difficulties, but fingers crossed, I'll figure it out soon! I am in the military, I have an amazing husband and one year old son, and I look forward to exploring the world with each of you!