This article that I got is from CNBC and it talks about Southeast Asia can be the next coronavirus case hotspot in the country.

As you all know that the coronavirus is a pandemic virus that is worldwide now. In the article, it says that Southeast Asia's coronavirus infections has risen quickly in the past recent weeks. Mounting worries with experts say that the regions can turn into a hotspot for the fast spreading disease.

As a whole region, it has reported more than 28,000 cases as of Sunday, according to the data by John Hopkins University. Indonesia, the Philippines, Malaysia and Singapore account for 87.9% of total cases reported in Southeast Asia, of what the data showed. in Singapore, cases have spiked dramatically in the last two weeks, with new clusters of infections found among migrant workers living in packed dorms. 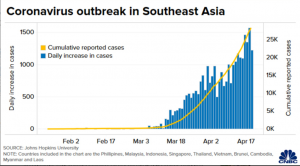 As you can see in this chart, it had dramatically increased within weeks.

Capacity to test for the coronavirus vary widely across Southeast Asia. Singapore is among the top globally with 16,203 tests per million people, while Myanmar is close to the bottom with just 85 tests per million people in the population. Expert say that the Philippines and Indonesia have mostly singled out as they are concerned about them two countries being the largest in the region with population. 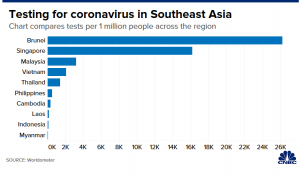 Indonesia, which has the world's fourth-largest population of over 270 million, has conducted around 42,000 tests in total. That is equivalent to 154 tests per million people.

Overall, in this article, it talks about Southeast Asia could be the next coronavirus hotspot. In my blog post, I added some charts to show some increasing charts and numbers. In the article itself, there are ore charts that are shown.

3. Note the following for each country:  New Zealand

Number of children per woman:  1.9

Note the following for each country:  Ireland

Number of children per woman:  1.9

4. Describe and compare the structure of the population pyramids and indicate the stage of the population transition for each. (Hint: Looking at the graph, what does it tell you about the birth rate and death rate over time of the country?)

Then lastly for the ages where the population is less is at the ages 65 and older.

Overall, the graphs tell me that the populations for both countries is that it is greater from birth to their middles ages. Then population decreases when they are 65 and older.

5.  Finally, how will the two countries compare (to current population) in 2050? How is this reflected in the population pyramids?

If you wish, you can include the population pyramids, but that is NOT a requirement.

The population in 2050 for New Zealand is 5.9M and for Ireland it is 6.3M. That tells me that Ireland will have a greater population in 2050 by 0.4M people. In the graphs, it shows that it is increased from the "Current and Projected Population" graph.

This article is from "International Policy Digest" and it is on South America is Facing Unrelenting Crisis and Uncertainty - 2018.

In this article, it talks about South America experiencing the most difficult periods, as Brazil, Argentina and Venezuela succumb to social, economic and political turmoil. Halfway through the first decade of this country, these three countries enjoyed economics and social stability, creating a prosperous time in the region, but everything changed after 2011 when the countries began to experience what we see today as a regional crisis.

South America received one if its biggest blows when Brazil, which represents roughly 34% of the Latin American economy. Brazil's economic effects in times of crisis spread like tentacles across the region affecting the development, production, and the growth of other countries. - For example, Argentina. They experienced a slow down in growth of exports and production. especially in the car industry during the 2015-17 period. Argentina is yet to face increasing social unrest as austerity measures kick in and civilians begin to feel rising inflation, which is expected to reach 45% by end of the year.

Venezuela's situation is expected to continue in a downward spiral as the government failed to stop rampant inflation, projected by the IMF at 1 million percent and the decline of the Venezuelan economy. Venezuela has plunged into the worse crisis in history purchasing power declines at daily rates and the economy registers double-digit contractions. The Venezuelan government introduced new mechanisms to deal with the economic crisis in August, however, they are futile as the country continues to plummet into the economic crisis. The future Venezuelan remains as dim as the country's oil and h=gas industry, which represents 90% of its exports.

South America is expected to continue facing economic and social unrest as long as these three countries are not able to to solve their internal problems. South America's economic dynamics have reached a level of interconnectedness that spreads not only economic decline, but also stagnation. The future of South America will remain gloomy until the new government of Brazil takes power and Argentina is able to resolve its political drama and economic debacle, especially considering that their GDP will contract by 0.5% by 2019. On the other hand, Venezuela remains the most negative scenario with very few options left for their economic revival of the country .

This article was in South America. It also includes Brazil, Argentina and Venezuela for the geographic concepts.

This article that I found is from "Bloomberg." It is about Russia reporting their first coronavirus case and restricting flights from China.

Since the coronavirus has been an active issue throughout the world. I decided that I would use this article in my blog post. The place of where this takes effect is in the Siberian regions of Tyumen and Zabaikalsky Krai.

According to the article that I found, Russia has announced their first two cases of the coronavirus on its territory. Two nationals were diagnosed with the virus in the Siberian regions of Tyumen and Zabaikalsky Krai. Russia has canceled nearly 200 flights to China, but however maintain four routes from Moscow. Russia will close the border with Mongolia to Chinese citizens. The plans was to evacuate as many as 641 Russian citizens from China's Wuhan and the surrounding Hubei province.

The first Russian confirmed illness from the coronavirus emerged as the government of the country of nearly 147 million people has tightened restrictions on travel to China. The deadly disease infected 10,000 people around the globe. On January 31, 2020, Prime Minister Mikhail Mishustin ordered a ban of people crossing the border of Russia with China.

The infected people, who arrived in Russia are in stable condition without fever and the illness is not at risk of spreading.

Hi. My name is Bradley Lake. I am from Hooper Bay, Alaska and currently living here in Fairbanks attending UAF. I am currently a Junior majoring in Elementary Education. After I am done, I plan on going back home to teach.

I haven't studied geography before, but I have taken classes when I was in middle school. I think this course is my first course of geography here at UAF. This course is one of my social sciences requirements and I chose to take this class. I am excited for this class.